In 1844 the inhabitants of Dundee had their attention drawn to, “the evils and consequences attending the practice of burying the dead within the populous precincts of large Towns, and whether regarded as a point of taste or feeling, or the safety to the health of its inhabitants, it is now generally admitted that the custom should be discontinued whenever practicable. The spread of education – the consequent greater intelligence that is abroad among all classes – and the ready appreciation of what is beautiful and appropriate, have led to desire that the style, the situation, and the whole arrangements of Public Burying Ground should be greatly improved.” The townsfolk were persuaded and the Dundee Cemetery Company was launched as a limited stock company. The applications for shares more than doubled the number sought. 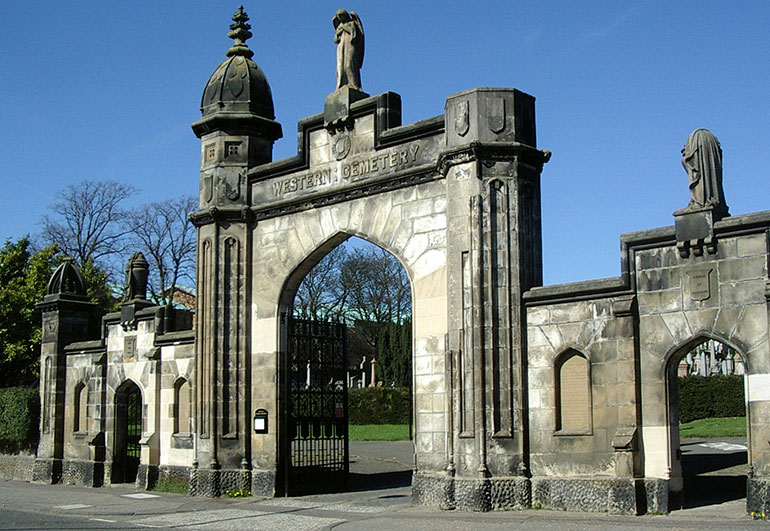 In March, 1845, notices appeared in the press that a site had been chosen and that the Directors were ready to receive applications for the laying out and ornamenting the grounds and, furthermore, a premium of fifteen guineas was offered for the plan that gained most votes. From the five designs submitted that of James Findlater was the most popular. He was also the most experienced as, in 1832, he had planned the New Burying Ground at the foot of Constitution Street.

Findlater laid out the oldest section of the cemetery, that bordering Perth Road. The upper sections, which included a quarry to the west, were developed two decades later.  In 1884, faced with completion from the new Western Necropolis, (Balgay), the Cemetery Company head-hunted Gordon Rae from the Craigton Cemetery near Glasgow to extend and upgrade the grounds.

In contrast to the town’s cemeteries, the lairs in the Western were purchased with absolute and perpetual right to the ground. At the outset there were six classes of lairs, three were distinguished by their position; family vaults along the retaining wall to the north, the south side of this wall, and along the east and west walls. Together with the plots in the central portion these categories were further divided according to whether they were enhanced with monuments, small headstones, or were the unmarked graves “for the poorer classes.” In a rare show of unity, in 1852, the Directors invited the charismatic Episcopalian bishop, Alexander Forbes, to consecrate the site as a place of Christian burial. One of the consequences of the Disruption of the Church of Scotland was that many of the middle classes became involved in the management and administration of church affairs. The design and ornamentation of their memorials often became a testament to their allegiance to a particular denomination – and also, by virtue of the position and material of construction, to their wealth and social standing. Later in the century and in the early years of the twentieth century “appreciation of what is beautiful” took precedence and there are fine examples of Celtic inspired crosses, and Art Nouveau and Art Deco designs. In 1923 the journalist, Norval Scrymgeour, tellingly described “the Western” as a sort of drawing room for swells on their way to Heaven.”

James Findlater managed to incorporate most of the traditional symbols of death and resurrection in his design for the entrance, regarded for many years as the most handsome in Scotland. A burst of lightening in May, 1953, shattered the statue of the burning bush on top of the east gatepost, and, sadly, this has never been restored. That decade also marked the decline of the cemetery into near dereliction. In 1979 most of the site was purchased for £1 by the then District Council. The north portion is now set to become a private burial ground again and, in 2014, the City Council designated a strip along the west wall for the interment of cremated remains. The symbol of an inverted torch, seen at the entrance and throughout the cemetery, was chosen as decoration, not only to represent the Christian belief in life eternal, but as a reminder that, when this life is extinguished, the dead gain new life through our stories and memories.